Every year, MIAMI Magazine (a publication I contribute to) hosts an annual celebration of their restaurant issue – Live and Dine Miami.  It’s a really great tasting event with Miami’s best chefs – who all take it very seriously.  Fun atmosphere, an overwhelming amount of ridiculously delish food, and a chance to chitty chat with our city’s top food talent.  What more could you want?

This year’s event is next week – July 31st. The tickets are going fast, so be sure to get yours soon – definitely babysitter worthy.

Food from Catch, Swine, The Dutch, Cypress Room and more.  Like going to ten restaurants in one and only trying their best dishes (last year I overloaded on Haven’s Tiger Shrimp…yum!). 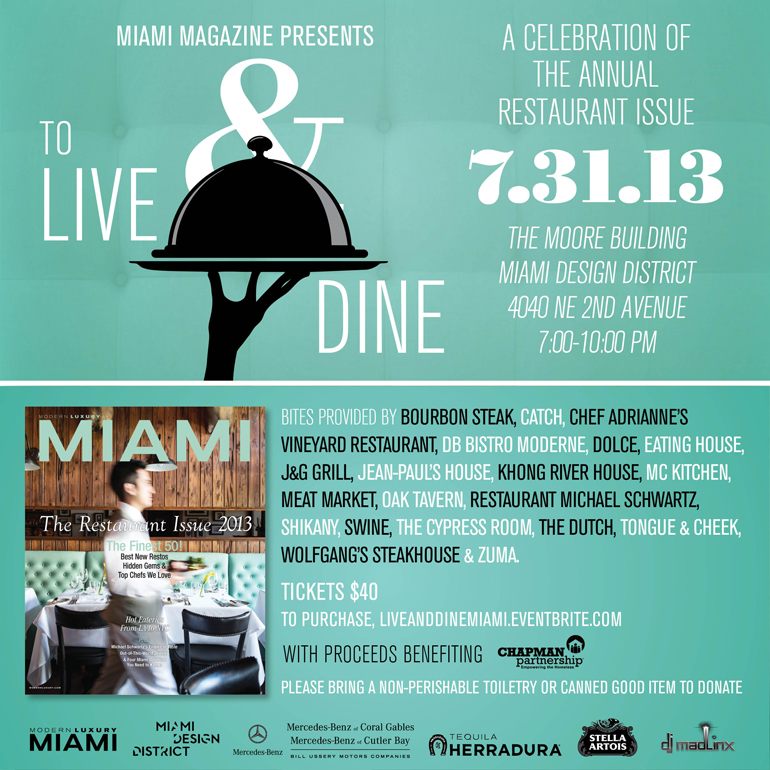 I recently read a post on Mercola.com (the nutrition/progressive Dr. who I think is great…as does Dr. Oz) about foods that are banned in other countries but of course, legal in the U.S.

A lot of important (and sadly, scary) stuff here.  Most notably for parents I think is the element of farmed salmon – linked to everything from ADD to cancer and food additives like artificial coloring and preservatives.

I’ll leave it at that and let you draw your own conclusions…just read.

For all my Colombian readers or anyone who wants to try (or already loves) genuine Colombian food, The Intercontinental at Doral is hosting guest chef Rafael Suarez for one week of fabulous cooking.

Directly from Bogota, Chef Suarez will present some of his favorite dishes from July 15 to 21 including Colombian specialties from the country’s various regions.  The event will take place at the hotel’s Armillary Grill – see invite below.  You are welcome to try to use the 10% off code from the Beacon Council.

Is anyone other than me spending a TON of money on little fruit/veggie squeezies like these, these or these? 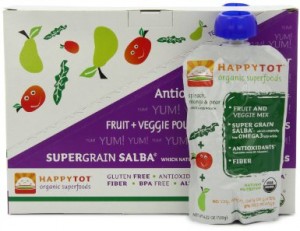 They are such a great resource – you can throw them in your bag and they last forever.  Good little snack without a ton of sugar, carbs, artificial x/y/z, etc. Also well-portioned – instead of your kids “fishing” in a bag of goldfish for 20 minutes until they’re full and have no room for your gorgeous but less-than-goldfish-delicious baked Cod with vegetables dinner, they get just enough to warn off crankiness and leave room for meals.

When I first started buying these (about four years ago), they were around $1/squeezy.  Even then, it seemed expensive but I was a new mom and they filled a major need. We stopped using them for a while but my second is now 18 months and I’m in that world again. The prices have climbed quite a bit…Even in the last six months I’ve seen them go from  $1.29/pp to $1.59.

So, I’ve tried to find a way to circumvent this ludicrous pricing. 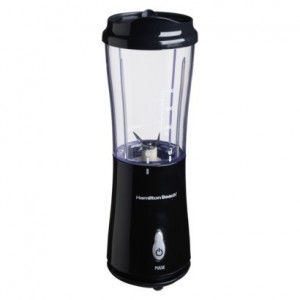 Enter “make squeezy at home project”.  First step, get a personal blender (using/cleaning the huge blender for a 3 oz smoothy is seriously time prohibitive).  I bought this one – less than $15, not perfect but works for what I need.

Second step, Obsess over “make your own squeezy” pouches on Amazon for a few days.  Add/remove items from your basket, then pull the trigger.  I Have done the work for you.  Here are the few I debated on and why I made my final selection.

First is the Squooshi pouch.  Clearly the cutest, but also the most expensive and the comments referenced the interior pouch curves getting dirty which makes sense.

Second is the EZ squeezes.  These almost won (good price), but they’re small and lately my little one likes larger “concoctions” (I also thought the little top would get lost).  Similar concerns went with the Yummi pouches and some reviews said they leak on top (and they WOULD in my bag). 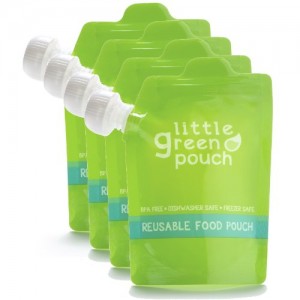 So, final decision – I went with the Little Green Pouch.  Good price, seemed to fill all of my needs, and Daily Candy gave it an award so it must be good

On to the making.  I already had some organic frozen berries, so I used those.  Added some Almond Milk and Sunflower Seed butter for liquidity/protein.  I can’t give measurements, because I just kept adding as I went and saw the consistency…I suggest you do the same.  I skipped the ice since my berries were frozen already, and I wanted to be gentle on the cheap blender.

Filled up two little pouches with my concoction, put one in the freezer and one in the fridge (and gave my little one some of the smoothy which he loved)! BOTH were a success!   I took the freezer one with us to music class so he could have it afterwards and it was perfectly “slushy” a few hours later.

For my second batch, I am going to use some yogurt to thicken it up – it got a bit watery in the fridge and am considering putting in Quinoa (though I would use those fast…grains and bacteria are friends after a few days).

I know I’ll still buy the crazy expensive ones to throw in my purse, but I’m hoping I don’t need to buy anywhere near as many.  If they want a snack at home or we need snacks for the car, I’m going homemade all the way!

The old Bond Street space in TownHouse South Beach has now been filled by a stylistic club/bar serving food as well.  A powerhouse team is behind this locale, let’s all hope for the best! I’m not sure if a lounge concept fits into my lifestyle anymore ( I can barely stay up for drinks after dinner and can barely wait to eat dinner, so stopping for drinks beforehand never seems to happen), but you never know.  Either way, when you’re using a babysitter for nights on the town, there is no hit or miss – these places better be good!

I may try it out and will udpate if I do (with a babysitter worthy or not judgement).  See Press release and pix below.

The Creative Pop Up Bar Offers Sophistication, Style and Substance

Mister Wolfe, in the former Bond St. Lounge, is the natural evolution of the traditional bar and lounge.   Enticing and intimate, Mister Wolfe is sophistication through simplicity for the savvy crowd who gets it, been there, and craves an alternative.

Mister Wolfe is familiar yet fresh.  Max Pierre, owner of Arrive Miami, AE District Concept Gallery and CMO of Public School, a contemporary menswear private label; Erik Yehezkel, former nightlife director at the Delano; and AE Collective, one of the leading DJ management and booking agencies, bring you Mister Wolfe.  The exceptional DJs offer an eclectic and continually progressive range of music rooted in quality.  With its stylish new build-out, Mister Wolfe is not just a place or persona; it’s an ideology to bring a new perspective to nightlife and entertainment.

Much more than a bar, Mister Wolfe delivers great food through the culinary expertise of Nuno Grullon, owner of Ironside Cafe, and responsible for the first all organic menu at Metro Organic Bistro.  Passionate about all natural and local, Grullon adds a delicious dimension to social eating by bringing his philosophy across the bridge.  The bar program serves signature cocktails like the Wolfe Bite and Townhouse Secret, along with wine, Champagne and a full bottle list.  Mister Wolfe draws a diverse crowd from the social set to the cultural influencer looking for something as simple as good food, good people and good music.